Why confusing illusion with reality can lead to disaster, on Wall Street and in life. 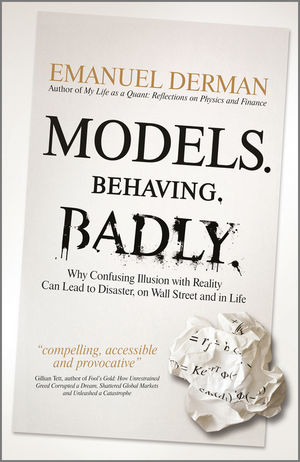 Note that the cover is more clever than you might at first notice. Ceci n’est pas une pipe.

You might also have a guess at the reason for the punctuation in the title.

This is not just another quant book written by a quant nerd.  It is suitable for everyone, but — as stated above — the message is different depending on where you’re starting.

The real topic is approached obliquely.  The book is telling us that things that we want to make simple are actually complicated.  Finesse is in order.  When you have the urge to skim a section, that is probably a sign that you should read that part most carefully — and wonder why it’s there.

There is a lot of noise about how models have caused economic turmoil.  The key point of the book is that we have no choice but to use models.  Given that our brain creates a model for what we see, it shouldn’t be surprising that we have to use models for less fundamental endeavors.

The question is not “Do I use a model?” but rather “How aware am I of the model and its limitations?”.

Once we know what model we are using, we need to avoid abusing it by thinking it is real.

We should believe that the model is both right and wrong.

since it’s a model of a hypothetical world rather than a correct hypothesis about the one we inhabit.

It is a sign of the political power of models that commercial websites publish the value of beta, a parameter in a model that doesn’t work that well, but not the more fundamental and model-neutral volatility statistic sigma.

… technical analysis, a combination of rational and magical thinking that involves spotting the repetition of patterns in the trajectory of stock prices.

Models are only models, not the thing in itself.  Models are better regarded as a collection of parallel thought universes to explore.

Everything I’ve ever told you has been a lie, including that.

the devil in “Bedazzled”

13 Responses to Review of “Models. Behaving. Badly.” by Emanuel Derman