Compare historical fund returns to what would have happened by chance.

The strategy is to gauge skill by picturing what luck looks like.

We’ll start with a picture that is a fund’s return for the year 2010, plus additional information on returns for the year. 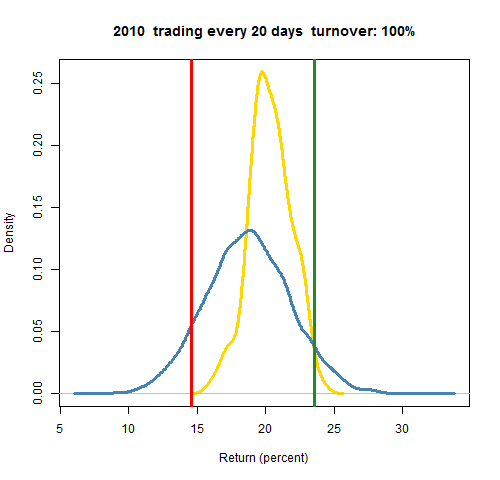 The cast of characters:

If we just had the red line and the blue distribution, then that would be very much like using a peer group: we compare the fund return for the period with the returns for the period of a cohort of peers.  There is a long list of ways in which peer groups are inferior, though.  Here’s one:

With random portfolios we know that what is represented is pure luck.  Peer groups give us impure luck — we have no way of knowing how much is luck and how much is skill (that’s what we’re trying to find out).  We get results from peer groups, but we don’t know what those results mean.

It may be that the red versus blue analysis is as far as we can go — that’s as much data as we have. We would conclude that the fund moderately underperformed.

But if we know the positions of the fund at the beginning of the period and the turnover of the fund, then we can learn much more.  We do this with two comparisons:

We can also compare red versus green.  This is probably more powerful than peer groups or benchmarks, but what is missing is significance.  We’ll know if trading yielded a bigger or smaller return, but we will not know if the difference is just noise.  As we can see by comparing green versus gold, it would have been very hard in this case to get a better return by trading — almost all trading would look bad via the naive test.

There are numerous ways to get the old methods of peer groups and benchmark-relative performance.

Random portfolios are also available from PPCA: PODs and PIPODs.

The advantage of PIPODs over Portfolio Probe is that the distributions are already created for you — you just need to locate your return in the appropriate distribution.

The advantage of Portfolio Probe over PIPODs is that you can specialize the constraints and the time period to suit yourself (the StockTrib offering for performance attribution from PPCA does provide some customization). In particular, with Portfolio Probe you have the power of the shadowing method (the gold distribution) at your disposal. You also have immediacy — you can get performance in real-time.

In particular, there is: