4 and a half myths about beta in finance

Much of what has been said and thought about beta in finance is untrue.

Myth 1: beta is about volatility

This myth is pervasive.

A stock can be high beta by being volatile or by being highly correlated to the market.

Note that the correlation and volatilities are on returns not prices.

If  A is an asset and the market is M, then one way of writing beta of A is:

Myth 2: beta is about risk

This one is actually true.  But you have to read the fine print.

It is not risk as you are likely to think of it.  Beta is an indication of the risk that can’t be diversified away by holding the market portfolio.

If you have an unnatural obsession with market portfolios, then this is a fine measure.

Traditionally beta is estimated with 60 months of data.  Let’s see how that does for IBM.  (Since we are being traditional, the example has to be IBM.)  Figure 1 shows the data. 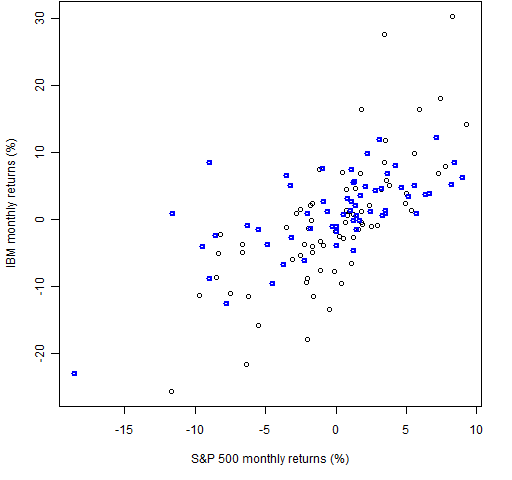 The regression for those latest 60 points gives us the coefficients:

So we get a beta of about 0.75 (and a positive alpha).  We can see how variable beta is by doing a bootstrap: 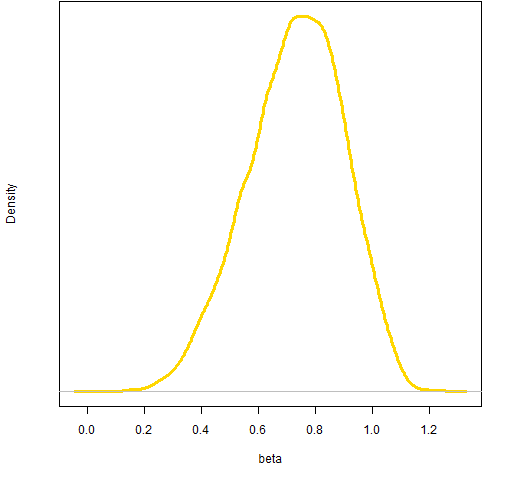 We don’t have to follow tradition and use 60 monthly data points.  Let’s see what happens when we use 250 of the most recent daily returns.

This gives almost exactly the same value as the monthly data (which is fairly accidental), and the estimate is much less variable. However, it is not as if it is free of variability. 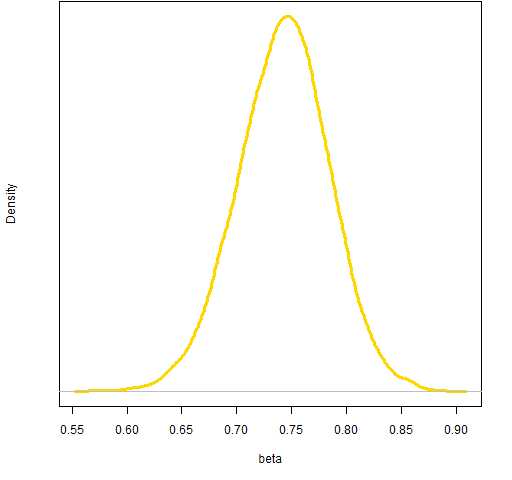 Many people think that a stock’s beta is a fixed value, as if it were tattoed on the stock’s forehead.  I suspect that a beta that is stable through time is a very rare creature.

We can get a sense of the variability over time of IBM’s beta by looking at the two components of beta that we identified before:

We can get a reasonably good estimate of the ratio of volatilities on a daily basis by fitting a garch model to the daily S&P data and (separately) to the IBM data.  The result of such an exercise is shown in Figure 4.

Figure 4: The ratio of daily IBM volatility to S&P 500 volatility as estimated by univariate garch models.

Getting instantaneous correlations is more problematic.  But it is quite easy to get a 200-day rolling correlation, which is shown in Figure 5.  The date of a correlation is the final day used in the calculation. 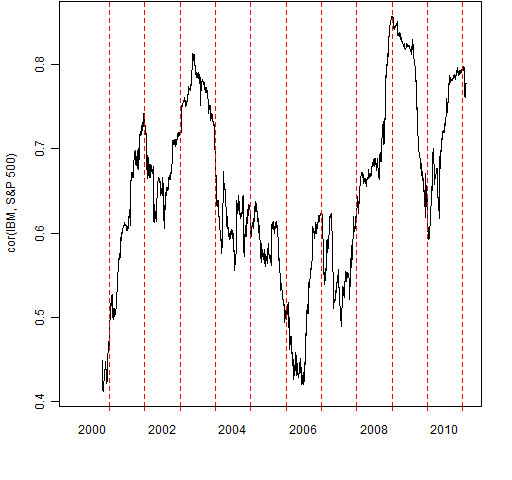 Finally, we can multiply the two components to get an estimate of beta over time.  This is done in Figure 6. My guess is that if we had a daily estimate of correlation, then the estimate of beta would be even more variable.

Beta comes from the Capital Asset Pricing Model (CAPM).  This model says that the return of a stock is explained by the return of the market.

No one believes that the market is the only risk factor.  Once upon a time it was expedient to make that assumption.  These days we have data and computers  — we don’t need to make that stupid assumption any more.

Now we have much more freedom in the stupid assumptions that we can make.

So far we have only discussed beta as it pertains to a single stock, but the term “beta” has escaped CAPM into a broader context (as indeed has “alpha”).

In more general use “beta” means returns driven by exposure to risk.  The statement:

means that the speaker believes the fund only makes (or loses) money because of exposure to the technology market, as opposed to outperforming in a skillful manner (alpha).  The beta that is implied is different than if the fund aimed at spanning the entire market.

When I did an internet search on beta in finance, what I found tended to fall into two categories:

The Wikipedia article on beta in finance is very good.  Many of the sensible items in the first pages of the search use material from Wikipedia — some blatantly, some more subtly.

Are there problems for which beta really is a useful statistic?

The analysis and plots were done with R. The script of the R commands for the analyses in this post is beta_myth.Rscript

Update: Josh Ulrich got a couple errors from the script above, so he kindly sent a revised script that works for him, and it also shows a simplified way of getting the running correlation.  It is beta_myth_jmu.Rscript

To get the pp.timeplot function that was used for Figures 4, 5 and 6 into your R session, you can do the command: