A bit of perspective on a buzzword.

The Axioma Quant Forum in London included a discussion of smart beta.  I took two highlights from it: a point of view and a question.

The point of view was stated by Gerben de Zwart: “Smart beta seems like a replay of simple quant strategies of the past when not carefully implemented.”

The question: Who should decide on the beta mechanism? Pensions? Buy-side? Sell-side? Others?

The first thing to settle is what “smart beta” means.  That’s hard since there doesn’t seem to be agreement.  The “beta” comes from the Capital Asset Pricing Model.  If it were meaning beta as in a number, then “smart beta” would be a malapropism.  But it uses “beta” more abstractly as in “market exposure”.

No surprise that the general concept has multiple names, such as: alternative beta, new beta, advanced beta, enhanced beta, beta plus.

Another associated word is “passive”.  Figure 1 is stolen from “What does ‘passive investing’ really mean?”.  Smart beta is an attempt to be passive yet retain some advantage of being active. 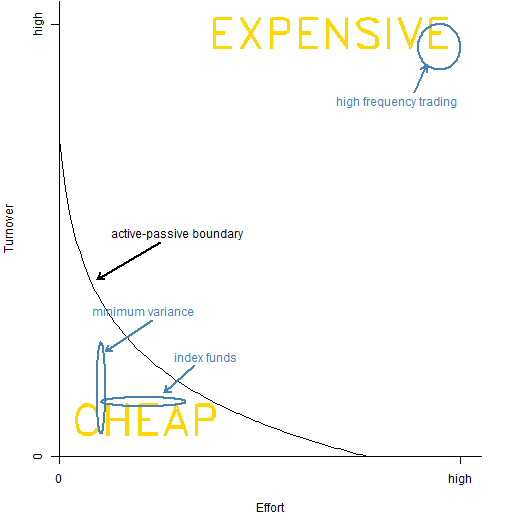 Smart beta inhabits the borderland between active and passive.  Some people include low volatility strategies in smart beta.  A key component of smart beta is fundamental indices.

“Passive”, “beta”, “smart beta” are all generally following some specific index. Market cap weighted indices have an advantage in that there is not a need to rebalance when tracking them.  Hence they have an easier time pretending that they are not a trading strategy.  But indeed they are.

Hardly anyone is going to be fooled into believing that smart beta schemes aren’t a trading strategy.  Another name for smart beta has to be dumb alpha*.  That may not find much favor from marketing teams though.  Taking the spin off is perhaps a good test: if an asset owner is comfortable buying something described as dumb alpha, then it might well be suitable for them.

The aim of smart beta is to get good results with little decision-making effort.  This will be minimal effort from the owners of the money, and not a lot of effort from anyone else so that fees will be small.  I hear rumor that not all smart beta funds are as cheap as might be expected.

So what does “good results” mean?  “Good” is relative.  When a strategy significantly underperforms an alternative strategy, then that strategy is going to lose assets.  Low volatility strategies are disposed to outperform in bear markets and underperform in rising markets.  This is the right way round — withdrawals are not likely to be so bad when there is underperformance but returns are positive.  However strategies that underperform in falling markets are going to be infested with teflon money.

There’s one class that is probably most vulnerable.  Strategies based on a single, constant factor — naive quant strategies — are subject to underperformance for extended periods of time.  Markets are dynamic.

While “market exposure” is ill-defined, it is related to another piece of vocabulary: “diversity”.  If there is diversity, then underperformance is unlikely to be extreme.  Smart “smart beta” will pay attention to diversification.  Asset owners might consider diversifying by combining multiple smart beta strategies.

The second dimension in Figure 1 is turnover, which the ultimate owners should be concerned about.  Turnover will remain higher than it probably should be as long as there is a focus on following indices.  If the explosion of indices advances the idea that indices are arbitrary and shouldn’t be taken so seriously, then smart beta will have been beneficial.

Both predictions can be correct.

I think the next market crisis will contaminate “smart beta”.  So while there may be substantial money in what is now called smart beta, the term won’t be used then.

The following links have some thought behind them.

“How Smart is ‘Smart Beta’ Investing?” from Robeco.

Hey Jack, now for the tricky part
When you were the brightest star
Who were the shadows?

from “Hey Jack Kerouac” by Natalie Merchant and Robert Buck

* I was disappointed but not surprised that I was not the first to think of this phrase.

5 Responses to On smart beta