garch and the distribution of returns

Using garch to learn a little about the distribution of returns.

There are posts on garch — in particular:

Daily log returns of 443 large cap US stocks with histories from the start of 2004 into the first few days of 2013 were used.  There were 2267 days of returns for each stock.

The components garch model assuming a t distribution was fit to each stock.

The estimated degrees of freedom for the stocks is shown in Figure 1.  Estimation failed for one stock.

Figure 1: Estimated degrees of freedom for the t in the components garch model for the US large cap stocks. 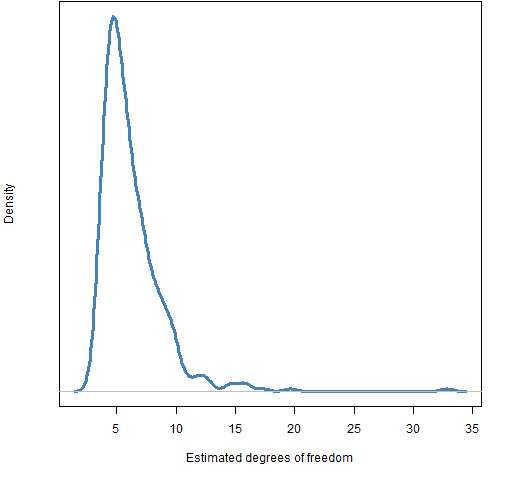 A lot of the estimates are close to 6 and hardly any (about 5%) are greater than 10.

Next was to see what degrees of freedom are estimated if the residuals are normally distributed.  The fits from the first three stocks were used — separately — to simulate series (200 each) and then fit the model to those simulated series.

Figure 2 shows the distributions of the estimated degrees of freedom from the three fits. 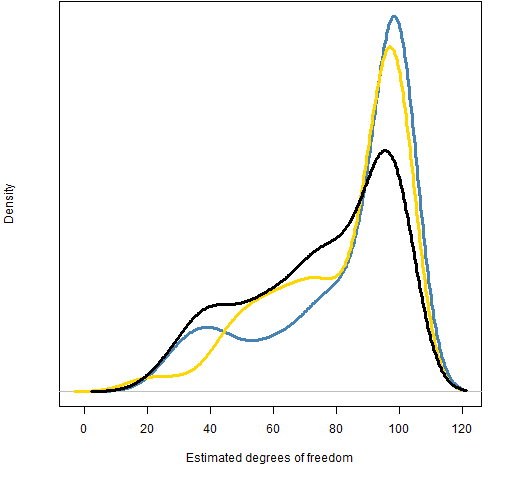 It appears that the black distribution in Figure 2 is different from the other two — that it has a much higher probability of being less than 80.  But the distributions are based on only 200 series each; there will be noise.  A further 1000 series were generated for each fit to see if the pattern persists with new, more extensive data.  Figure 3 shows the results. 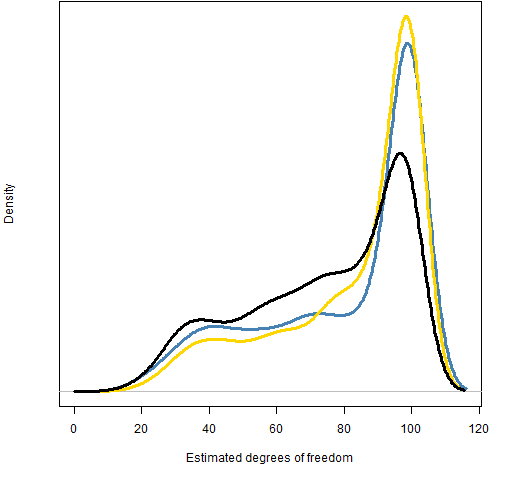 The distributions do indeed appear to be different — the black one has just over 50% probability of being less than 80 while the other two have less than 40%.

This means that we can’t assume that the estimate of the degrees of freedom is independent of the other parameters. 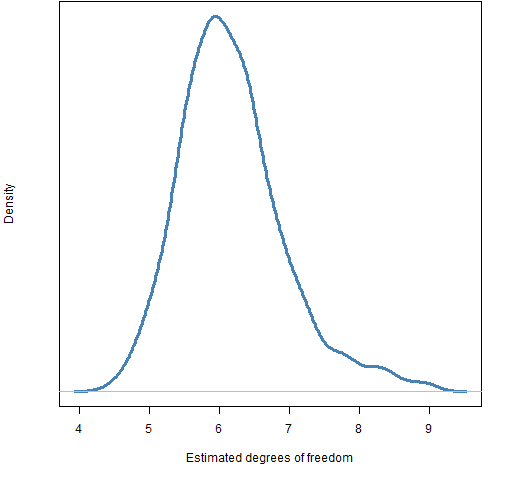 We’ve shown — once again — that the normal distribution is not believable.

We’ve also highlighted our ignorance about the true situation.

The R language was used to do the computing.

collect coefficients from the model on stocks

We start by making sure the rugarch package is loaded in the session, create the specification object that we want, and fit garch models to the first three stocks:

The initret object is the matrix of returns.  Next we create a matrix to hold the coefficients for all of the stocks:

That the matrix is initialized with missing values is not accidental.  We’re not guaranteed that the default estimation will work.  Now we’re ready to collect the coefficients:

This takes evasive action in case we don’t get a vector of coefficients like we expect — it uses the try function to continue going even if there is an error.  It also gives an indication of how far along the loop is (since fitting over 400 garch models is not especially instantaneous).

simulate garch from a specific distribution

Here is a function that will take a garch fit object and simulate a number of series using residuals from a particular distribution:

The residuals that are given to the simulation function are scaled (with the scale function) to have zero mean and variance 1 because the routine expects the residuals to be distributed like that.  It can get grumpy if that is obviously not the case.

Once we have these series, we can fit the garch model to them and save the coefficients:

difference of distributions from normal

We can get the confidence interval for the proportion of the black distribution from the confirmatory normal estimates being less than 80 by using the binom.test function:

That the binomial test sees 963 observations means that 37 of the 1000 series didn’t produce an appropriate vector of coefficients using the default fitting settings.

The stock that is the odd one out (the black one) is ABT.  The other two are MMM and ANF.  The fit for ABT is significantly more persistent than for the other two (but experimentation is needed to understand what is happening).

simulate given a garch specification

Here is a function that simulates series given a garch specification:

paired simulation with a t

Note that the call to pp.gspecDistSim in this loop is using R’s dot-dot-dot mechanism.

2 Responses to garch and the distribution of returns