An explanation of alpha factor alignment in portfolio optimization, and a look at the spectrum of views on it.

FactSet recently hosted an event that included a panel of representatives from several risk model vendors.  The first question thrown at the panel was about alpha alignment.  The opinions varied widely.  There was positive correlation between opinions and  products.

This is problem 7 in “The top 7 portfolio optimization problems”.  It has to do with factor models.

Figure 1 shows eigenvalues related to a factor model in a toy universe of ten assets.

Figure 1: Eigenvalues for the systematic risk (blue) and the total risk (gold). 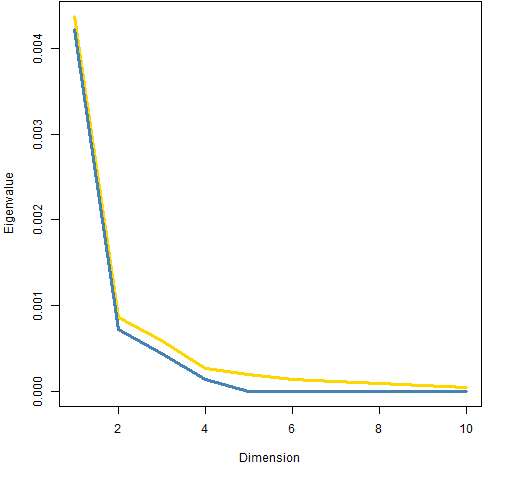 From Figure 1 we can infer that the factor model has 4 factors because the first 4 systematic eigenvalues are positive, and the rest are zero.

It is those zero eigenvalues that cause all the fuss.

The factor model simplification supposes that there are portfolios that have no systematic risk, only the idiosyncratic risk from the assets comprising the portfolios.  That is highly unlikely to be true.  It will be more or less untrue depending on the factors in the model.

An optimizer is going to like too much the portfolios with no systematic risk — you get return, you take little risk.

Consider the case where the expected returns are built with factors.  If there are factors in the alpha model that are not in the risk model, the optimizer is going to love those factors.  It will over-emphasize the zero risk factors and under-emphasize the other factors.  The realized utility will be less than without the distortion (assuming the expected returns really are predictive).

If the factors match between alpha and risk, then the zero systematic portfolios are out of the picture.

Problem solved? No.  The zero eigenvalues are only out of the picture in a simplistic world.

Optimization is done under constraints.  When there are binding constraints (and there will be), then the optimal portfolio will stray into the zero systematic risk region.

Suppose you want to go due north.  If after you’ve gone north for a while, you come to a cliff, then you have to deviate and go either west or east to some extent.  Similarly the optimizer will be forced to deviate from the direction of the alpha because of constraints.

Solution 2: Axioma has a method of dealing with this.  The catch is that there is a magic number that you have to come up with.

As already stated, there was decidedly no consensus on the importance of this issue.

Some stated that while the problem exists mathematically, the practical existence is minimal — in the scheme of things this is a triviality.

Others claim that it can be worth several basis points per month.

It is possible that both opinions above are true — that it is a big issue for some funds and a trivial issue for others.  I don’t know.  However, it is not a problem when there is no predictive power — you can not lose what you do not have.

A way to avoid the whole issue is to use a variance matrix that doesn’t have portfolios with zero systematic risk.  One such choice is Ledoit-Wolf shrinkage towards equal correlation.

There is a reason that risk vendors might not be keen on this solution.  Fund managers can get the computer code for free and use data that they have anyway.  Total revenue to risk vendors: zero.

Risk vendors are likely to come back with the argument that their risk models are more informative than a Ledoit-Wolf estimate.  The inputs to their models are more than just prices so the output has more predictive power.

That’s a reasonable hypothesis.  Being of a scientific bent, I’d like to see evidence.

If it is true, then I see two alternatives for optimization:

In years past there was a good reason to have zero eigenvalues because that meant that the variance matrix could be represented compactly.  But now the size of a variance matrix is unlikely to be problematic.  The eigenvalues of all the factors excluded from the model could be set to the mean of their eigenvalues if they were in the model.

Are there additional alternatives to solving the problem?

Steve Greiner was the referee of the risk vendor panel.  He started off the event — focused on risk — with a story.  He wasn’t sure how well it went over, but I liked it at least.

Two little fish are swimming along together.  They pass by a big fish who asks them, “How do you like the water?”  The little fish continue to swim along.  After a while one of them turns to the other and asks, “What’s water?”