How variable are garch predictions?

There have been several posts on garch, in particular:

Both of these posts speak about the two common prediction targets:

It will be the latter that is investigated here.

There are four garch models that are investigated:

Figure 1 shows the volatility term structure estimated with each of the four models using 2000 daily returns. 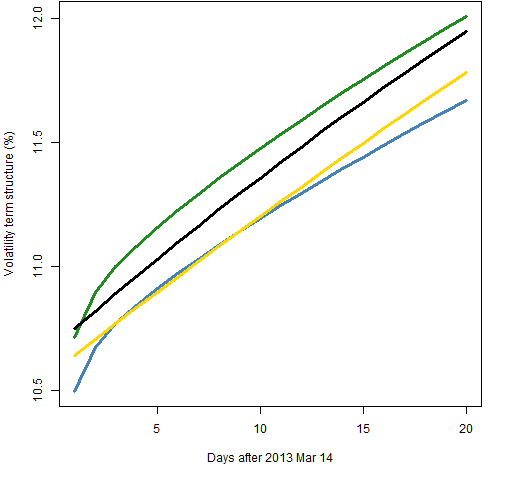 The more flexible prediction of the component model is evident.  The distributional assumption does make a difference. 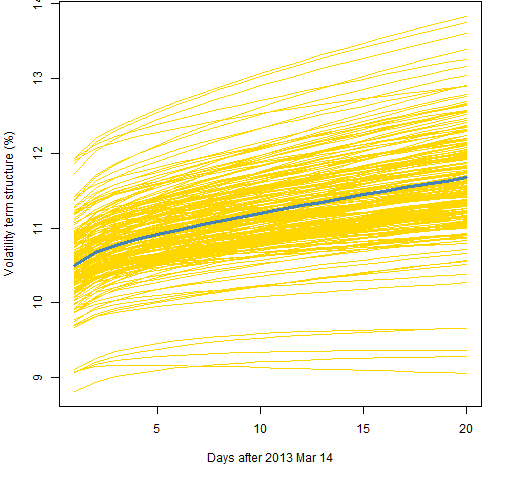 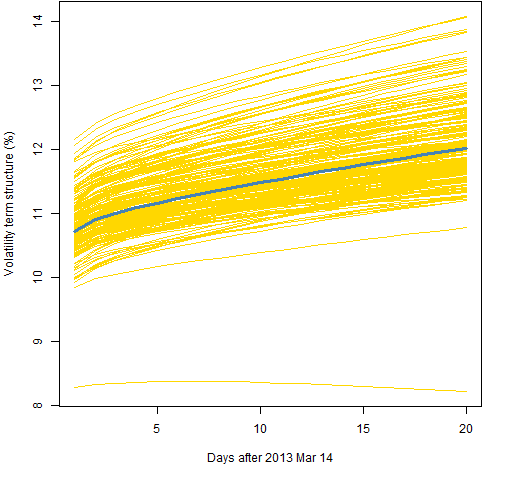 Figure 4: Volatility term structure variability for the garch(1,1) with t distribution and 2000 returns. 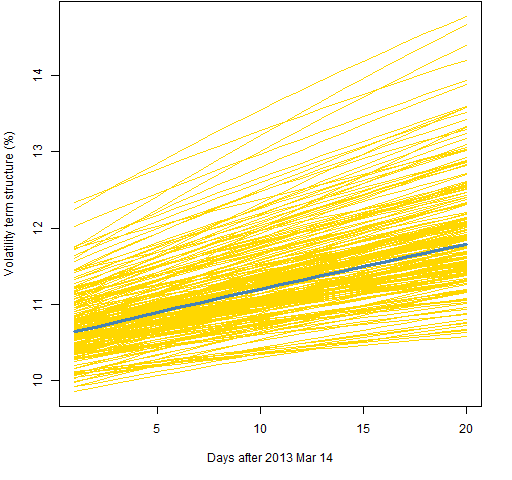 Figure 5: Volatility term structure variability for the garch(1,1) with normal distribution and 2000 returns. 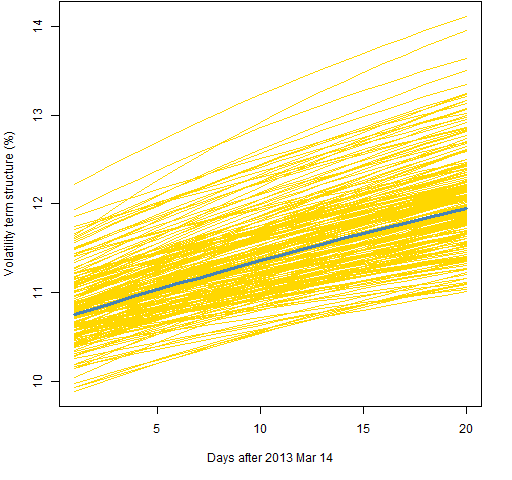 Figures 6, 7 and 8 all use the component model with the t distribution, like Figure 2.  The difference is the amount of data used. 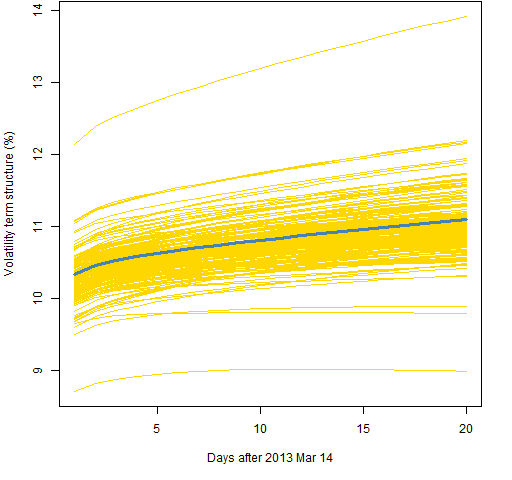 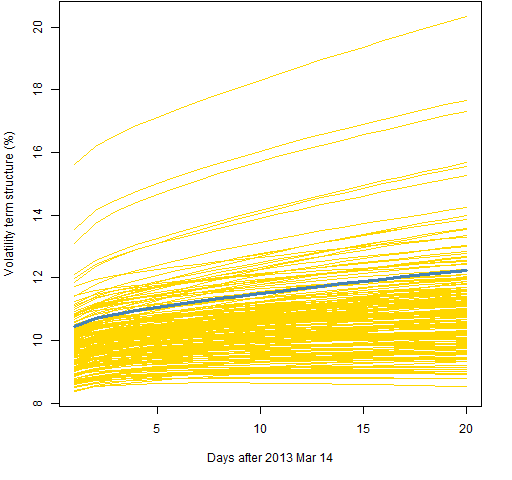 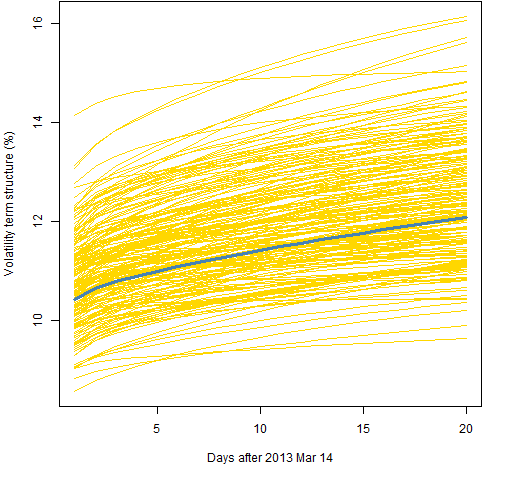 Figure 9 shows the standard deviation of the simulated predictions for the models using 2000 returns. 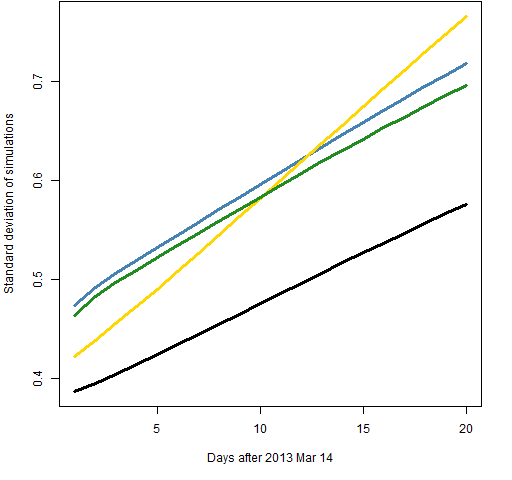 Figure 10 shows the standard deviation for the component model with the t distribution for the four different lengths of data. 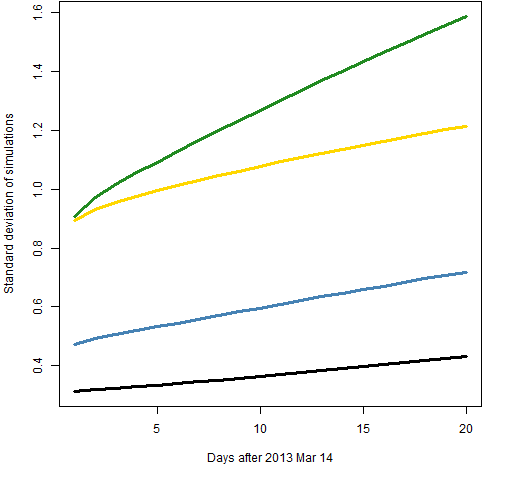 What are the weaknesses of this approach to variability?

What are other ways of answering the same question?

What is happening in Figure 10?

From Figure 10 we have a hint that using much less than 2000 returns can give quite variable results.  But increasing the sample size beyond 2000 doesn’t decrease the variability very fast — and the bias of the predictions goes up with the longer samples.

While this technique provides some illumination, it doesn’t give us the full picture.

The computations were done in R.  In particular the rugarch package was used.

I find it hard to remember the form of the garch specification.  Here is a little function that makes it easy to create specifications for the four models of interest here:

A function to get predicted volatility term structure is:

The function that created the simulated predictions was:

See below for why the call attribute was a good idea.

Technical note: If all of the parameters are fixed when fitting a garch model with ugarchfit, then the result is no longer the same type of object.  I’d rather at least have a choice to get back the usual type.  In this setting we are fixing all but the mean return.  Whether or not that parameter is fixed will have negligible effect on the results.

Figure 10 produced a surprising result.  It certainly could have been because of a mix-up in the objects — either the name of the object or the call that created it was not as intended.  But the simulation objects are self-describing in that they have an attribute that shows the command that created them.

showed that the objects were all created as intended.  Hence the surprise lies elsewhere.