The US market will absolutely positively definitely go up in 2012

The Super Bowl tells us so.

The birth of the indicator was quite auspicious.

Eight years ago I wrote about using random permutation tests to explore the efficacy of the indicator.  One of the points is that the fraction of correct predictions is not necessarily a good indication of the value of a predictor.

Thanks to Robin Blumenthal of Barron’s we now have updated data.  The indicator has been right 28 times out of 45.  Now I should say at this point that over the years the notion of “National” versus “American” has become fuzzy.  Also people have tried to fudge the meaning of “market” to make the indicator look better (the Dow Jones Industrials is used here).  So other values of “number correct” are possible.

Figure 1 shows the results of a permutation test on the 45 years.  The p-value for this test is about 13%.  Only 3 of the 8 updated years were correct. 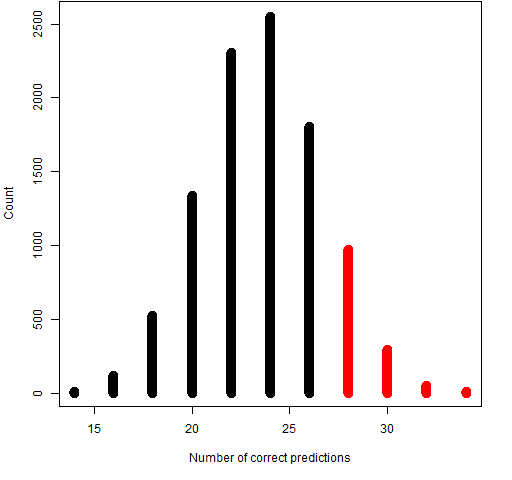 This, of course, includes the years that were used to form the “hypothesis”.  A stricter test excludes the first 11 years.  Figure 2 shows the permutation test in this case.  The p-value here is about 40%.

The meaning of p-values

Statistical hypothesis tests start by assuming a “null hypothesis” is true.  Calculations are performed as if this hypothesis were true.  The p-value is the probability of seeing something at least as extreme as the actual result under those calculations.

The permutation tests done for the Super Bowl have the null hypothesis:

If it doesn’t predict the market, then it doesn’t matter which team wins.  The test shuffles the winners and counts the number of correct predictions.  That is done a large number of times (10,000 in this case).

If the p-value is small enough, we reject the null hypothesis.

Undoubtedly the most common error in interpreting p-values is to think:

The p-value is the probability that the null hypothesis is true.

That is written in red because it is absolutely positively definitely WRONG.

By my reckoning the probability that the Super Bowl does not predict the market is 100% (to rounding error) — not 13% or 40%.

P-values are about surprise, not believability.

When you do a hypothesis test, you are playing a game — like a lottery.  But this is sort of a reverse lottery.  You know you have “won”, the p-value tells you how surprised you should be that you won.

In the Super Bowl test we got a p-value of 13%.  Not much surprise.

In “The distribution of financial returns made simple” there is a test of the null hypothesis that the daily log returns of the S&P 500 are normally distributed.  The p-value for that test is 10 to the minus 2762.  If we have a one in ten million chance of winning a certain lottery that we play once a week, then this p-value is equivalent to winning that lottery every week for seven and a half years.  I think we are surprised.

How much we should believe a hypothesis depends on more than p-values.

Here are my beliefs about the two null hypotheses:

The null hypothesis for the Super Bowl is inherently very believable to me.  Plus we don’t get a very surprising p-value.  It would take an extremely surprising p-value to overcome my inherent belief because I see no plausible mechanism that would make a sports game affect the stock market.

The null hypothesis of normally distributed returns is also inherently believable  —  it is reasonable to expect that.  However, we get an extremely surprising p-value.  This outweighs the inherent belief.  It takes essentially absolute faith in the inherent believability — as the persona of the return distribution post has — in order to ignore the surprise of the p-value and hold to the null hypothesis.

I see no plausible mechanism that would make a sports game affect the stock market.

I lied. (See the epilogue of this.)

If the statement had been about some physical system, that would have been fine.  But this is finance and there is a plausible mechanism — if enough people believe it, it can become true.  In finance there can be self-fulfilling models.

from “I Am the Ride” by Chris Smithers

The main data can be put into R with the command:

With or without R, the file is at https://www.portfolioprobe.com/R/blog/dowjones_super.csv

The functions (plus the superscore object) are in permutationTest.R.  You can get these into R with:

There are some subtle changes in the plot function compared to the one released with the “Permuting Super Bowl Theory” paper.