Hell is new and improved.

It can be found at the usual place:
http://www.burns-stat.com/pages/Tutor/R_inferno.pdf

If you want the original version for some reason, it is at:
http://www.burns-stat.com/pages/Tutor/R_inferno_090109.pdf

Most of the comments on the first version that I’d been saving were lost.  So if you made a suggestion for a change or addition and you don’t see it, please try again.

Tim Triche, Jr. and Mark Difford are responsible for prodding this revision to completion. Mark did most of the index as well as other changes.

If you have too much money, then you can get rid of some of it by buying a paperback version: 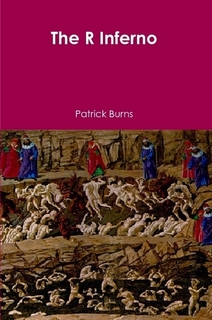 7 Responses to The R Inferno revised