Reminiscences of R in Finance 2016

When I announced R in Finance 2016 I talked about 2 days of conference and 50 speakers.  I missed out the 3 days of sleep deprivation.

But a pleasant 3 days of sleep deprivation it was — seeing old friends and making new ones.

I’m not sure that Mother Mary believed me that in our house we still use the mug from the original R in Finance.  Here’s proof that it still survives when so many of its comrades have perished. 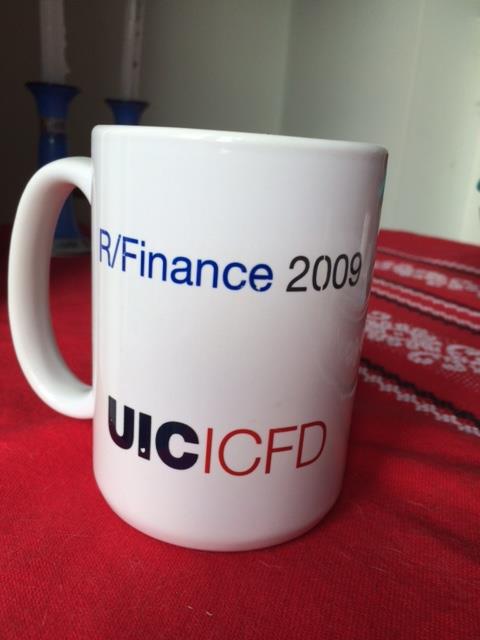 I had great fun giving my presentation.  The annotated slides and source for the R package are available on the Burns Statistics website.

There were lots of good parts.  I’ll limit myself to three (three is the largest number of chunks that people can easily remember).

Ahead by 1609.344 meters is Doug Service.  Universally my experience with talks involving stochastic calculus is that my eyes glaze over before the first dW drops.  At the start of Doug’s presentation my eyes were doing their cross-check preparing for landing.  But the landing never happened.  I have no real idea of what the equations were about — that didn’t matter: Doug made the idea of what he was doing perfectly clear.

If you insist on having formulas in your presentation (I highly discourage you from such a point of view), then you must track Doug down and make him teach you how to do it right.

Second is Dirk’s update on the package interfacing Bloomberg with R:

Last year I said A.

Last year I said B.

(You should be starting to see a pattern.)

Tied for third are:

The taxi back to the airport was flanked by a full moon on the left and the rising sun on the right.

This entry was posted in Quant finance, R language. Bookmark the permalink.

2 Responses to Reminiscences of R in Finance 2016