Comparing the behavior of the two on the S&P 500.

The underlying data are daily returns for the S&P 500 from 1950 to the present.

The VaR and ES estimates are 500-day historical with a one-day horizon and 95% probability level.  They were calculated every 20 trading days.

Figure 1 shows the VaR and ES estimates through time on the scale of percent returns. 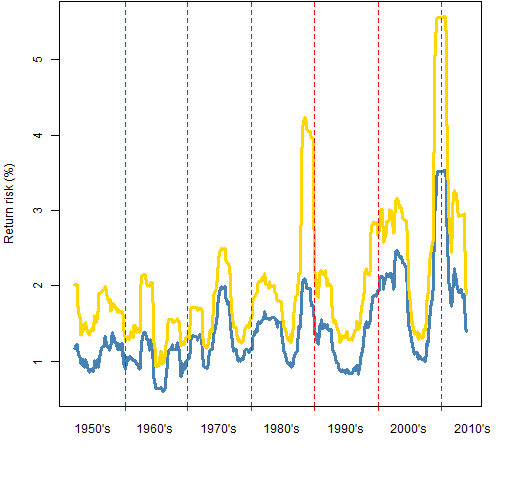 The last time of estimation was 2013 October 31 and had the lowest values for the last few years.  The last time the VaR was lower was in November 2007.

Figure 2 plots the ratio of the series in Figure 1.

Figure 2: Ratio of the 95% ES to the VaR for the S&P 500 through time.  The gold line shows the ratio under the normal distribution. 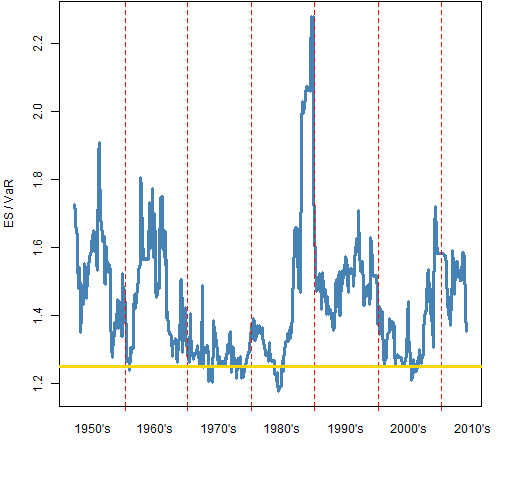 If you have a parametric model, then one way of thinking about Expected Shortfall is that it is just a constant times the Value at Risk.  “The scaling of Expected  Shortfall” shows that the ratio for the normal distribution is about 1.25.

The ratio of the values is not especially correlated with their levels.  For example, the ratio is near the value for the normal during the 70’s but elevated during the quiet period of the 90’s.

Variability of VaR and ES

Figure 3: Interquartile ranges of VaR (blue) and ES (gold) for the S&P 500 through time. 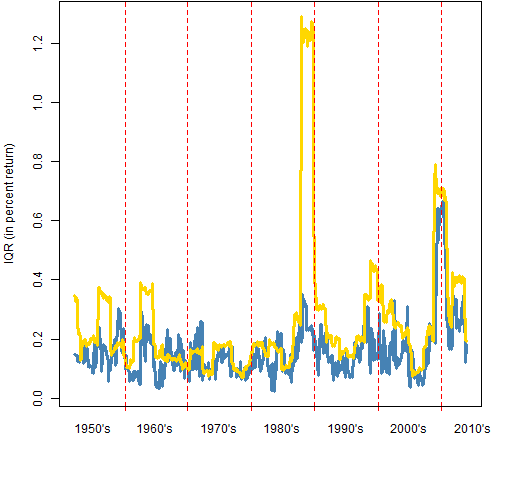 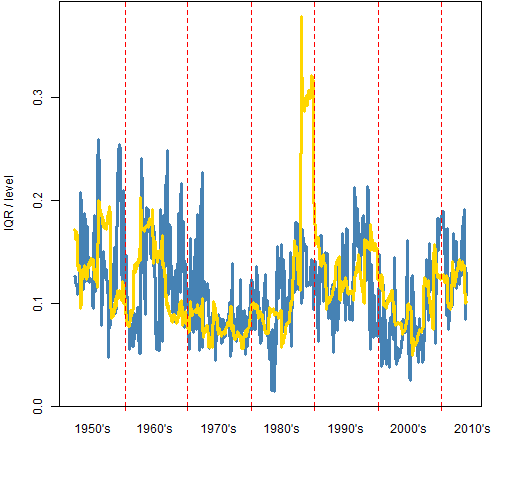 What does it mean that the IQR ratio is about 0.1?  When that is the case, then there are at most 2 significant digits among the central 50% of the estimates.

Why does the ratio spike up at the end of the 80’s for ES?  First is a conceptual answer, then a more data-driven answer is given farther below.

The specific cause is the crash of 87.  While the crash is in the estimation window, the tail is estimated to be quite long.  The length of the tail has a big impact on the Expected Shortfall.  The longer the tail, the more uncertain the length of the tail is.  Hence the uncertainty of the Expected Shortfall goes up when crashes are in the estimation window.

One bootstrap was performed by sampling the 500 returns 500 times with replacement, and then computing the VaR and ES on that new sample.  5000 bootstrap samples were created at each time point.

A single large outlier makes it apparent that the bootstrap is a rather blunt tool for this job.  However, I don’t think it misleads us.

All of the figures exhibit the fact that the Expected Shortfall is not statistically robust — one outlying value has a big impact.  In contrast, Value at Risk does have some robustness.

Thinking the accuracy of historical Value at Risk or Expected Shortfall is better than two significant digits is delusional.  That is true even assuming the historical model is perfect.  The lack of responsiveness of the historical estimates means they are substantially less accurate than that.

The variability of Value at Risk and Expected Shortfall are similar enough that there is probably no reason to prefer one over the other on that basis.

Computations and plots were done in R.

function to do estimation

This function depends on two functions given in the blog post “The estimation of Value at Risk and Expected Shortfall”.  By default those functions only report two significant digits.

The function just given was used thus:

This entry was posted in R language, Risk and tagged Conditional Value at Risk, Expected Shortfall, S&P 500, Value at Risk. Bookmark the permalink.

1 Response to Historical Value at Risk versus historical Expected Shortfall