The subtitle is “Organizational Design, Risk, and Value Creation”. 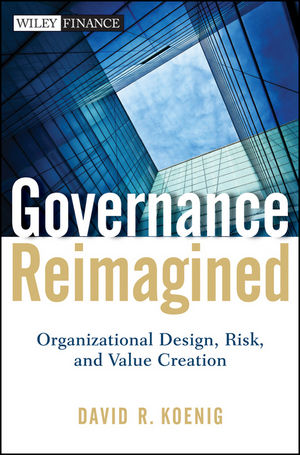 This should be a business book bestseller — it simply and clearly explains the process of value creation.  Its great disadvantage for bestsellerdom is that it doesn’t pretend there are magic bullets that create value.

I’ve met David a few times and he always impressed me as an intelligent and likeable guy.  However, he surprised me with this book.  I wasn’t expecting a book so deep with such simple explanation — something abstract yet thoroughly grounded.

It is a mixture and digestion of disparate sources.  Such as:

Organizations are central, organizations of all sorts: from giant corporations to impromptu neighborhood parties.

There is a single equation that threads through the book. It describes value.

This is a great device — it unifies most of the lessons of the book into one image. Yes, an image — the equation is more pictorial than mathematical.

Chapter 4 is a few pages that very effectively explain how traditional economics is lacking and point towards how we can do better.  If you’ve been touched by economics, this chapter by itself might be worth the price of admission.

Reading the chapter reminded me of taking a mathematical economics class in graduate school.  I was continually amused because I could tell what mathematics were going to be used to prove the theorem by the assumptions that were being made on the economy.  When I observed the same thing in financial practice, the amusement rather wore off.

The final part of the book is about governance.  Just saying the word makes my eyes glaze over, but even this section of the book is only vaguely redolent of interminable meetings.

A few different ideas are presented.  One of them uses the concepts of means and ends.  A governor specifies an end plus what is out of bounds in terms of means.  The governed are free to use whatever means they like to achieve the goal as long as their means are within the constraints.  Many people regard staying within the law as a minimal set of constraints on means.

An end might be broken into pieces so that the means at one level involve assigning a set of ends to subgroups that are each free to develop their own means (within constraints).

MIT professor Peter Senge uses the term chaordic, a combination of chaos and order to describe systems like Visa International, where order is produced from chaos.

It is not so much the sentence that I like, but the word that it introduced to me.  The basic idea is that there should be a balance between the creativity of chaos and the orientation of order.

The definition of “Normal Distribution” in the glossary is wrong, and fails to guide those who don’t know.  It is the latter part that is not good, being wrong is okay — that is what models do.

There are a few more minor failings, but they are very rare and barely detract from the good parts.

And why do some show no mercy while others are painfully shy?
Tell me doctor, can you quantify?
He just wants to know the reason why
The reason why

from “Imitosis” by Andrew Bird

This entry was posted in Book review, Risk. Bookmark the permalink.