What effect do predicted correlations have when optimizing trades?

This post looks at a small piece of that question.  It wonders if increasing predicted correlations will improve the optimization experience during a crisis (when correlations do rise).

The universe is 443 large cap US stocks.  We act as if we are optimizing as of 2008 August 29.  250 days of returns are used to estimate the variance matrix, and the next 60 days of prices are used to calculate the realized volatility.

The portfolios that were formed had constraints:

You can get a sense of the average correlation during this time from Figures 1 and 2 of “S&P 500 correlations up to date”. 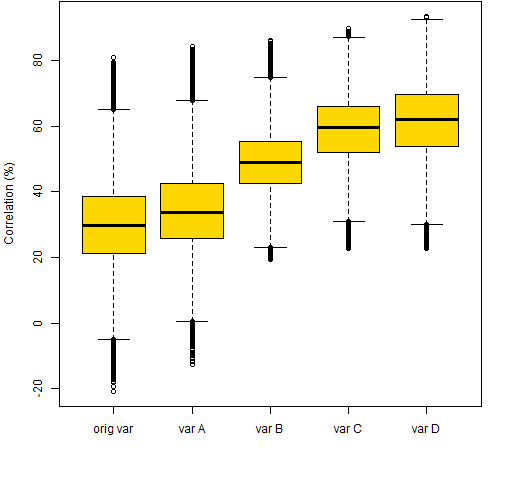 It was harder than expected to force larger correlations in this way — see Appendix R for details.

Figure 2 shows the realized volatilities of the random portfolios. 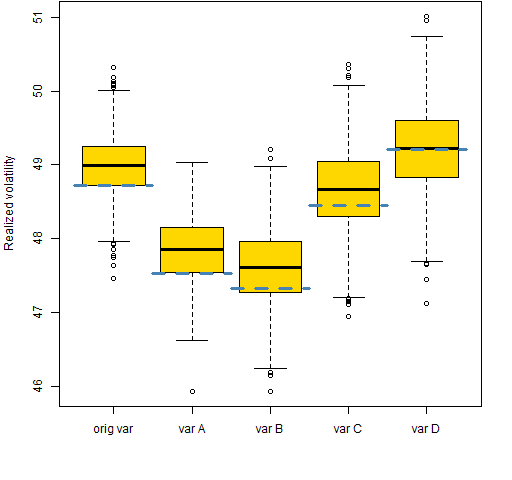 There’s some improvement with modest adjustment, but nothing spectacular.

In order to think that we know something, we’d want to have a better sense of the effect across different times and with different constraints.

In particular, we would want to see what happens when we bias correlations up, but they actually fall for the realized period.

Surely there are better ways to get bigger correlations.  What are they?

This might be a path to pursue, but improvement is likely to be marginal.  However, trying to understand the bigger picture definitely seems like a good thing to me.

Computations were done in R.

The var.shrink.eqcor function in the BurStFin package does Ledoit-Wolf shrinkage.  One of the great things about R is that if a function does almost what you want, it is often easy to make a modified version that does exactly what you want.

A function (called var.shrink.eqcorMod) was created that has an extra argument called correlation that defaults to NULL.  Then a section of code was added just before ans is created:

So the user can either put in a correlation value from the start, or wait to see what would be shrunk towards without intervention.

The variance matrices were created by:

The shrinkage in the original variance is about 0.125.

The code to produce Figure 1 was:

Generating the random portfolios is similar, except there is the additional constraint on the variance:

The realized volatility used in Figure 2 was computed like:

The addition of information to boxplots as is done in Figure 2 is explained in “Variability of predicted portfolio volatility”.