Equal risk contribution of assets determines the asset weights given the variance matrix.  How sensitive are those weights to the variance estimate?

The post “Risk parity” gave an overview of the idea. In particular it distinguished the cases:

A key difference is that the portfolio is fully defined by the constraint in the first case, but not in the second.  This post deals with the first case (but the second case is likely to be more useful).

How different are the risk parity portfolios if we estimate variance with Ledoit-Wolf shrinkage versus with a statistical factor model?

To answer that question, each type of variance was estimated on 477 constituents of the S&P 500 using daily returns.  Then 200 samples of 20 assets were selected and the risk parity portfolios were formed for each selection of assets with each variance matrix.  For each selection the trade distance (the value of buys plus sells divided by the portfolio value) in percent was computed.

Figure 1 shows the distribution of distances when the variances are formed with returns from years 2008 or 2010. 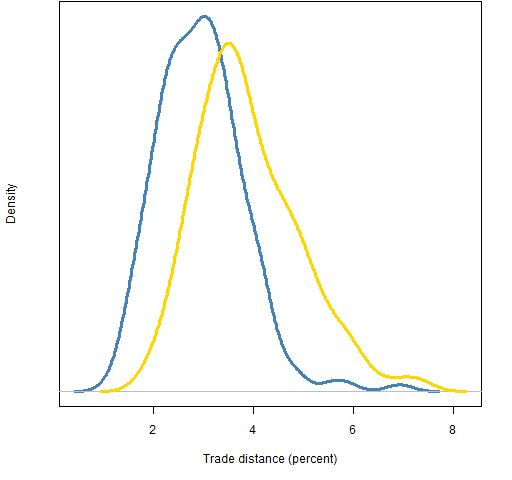 Interesting that the distances are smaller in 2008.  I picked 2008 specifically because it was a wild ride.

The variances used to produce Figure 1 were estimated on the whole universe.  The portion of those variances specific to a particular selection was then extracted for the actual computation.

Figures 2 and 3 show the trade distances between using full versus specific estimates.  It is a desirable feature to have this small. 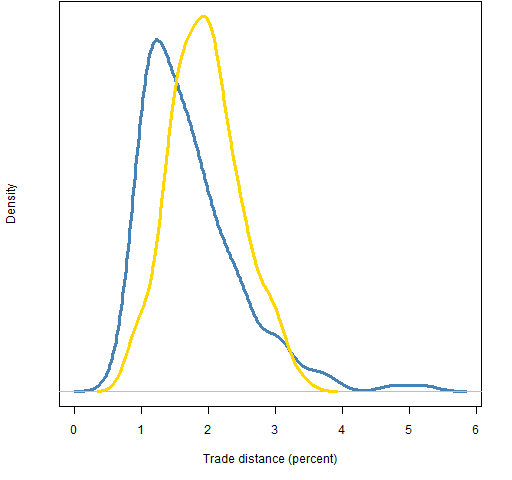 This picture makes sense to me — generally the big and small factor models agree well, but occasionally there is a wide divergence. 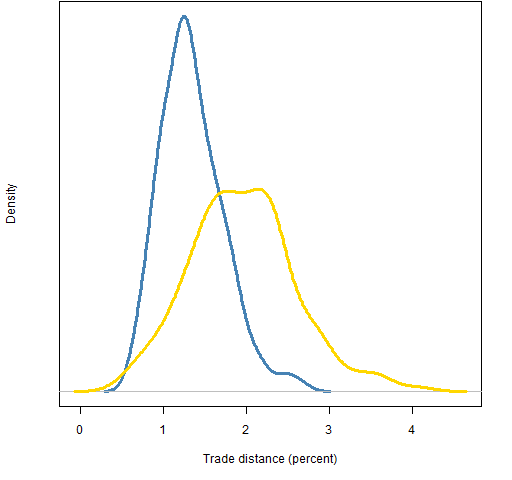 The variance estimates use functions from the BurStFin package, available at:

The functions written to do this task are in the file: risk_parity_varfuns.R

Some of the data for Figure 1 was created with:

The script to do all the computations is riskpartest.Rscript

The tolerance for the equality of risk was set to be quite small so that the differences between portfolios would be all due to variance differences.  This meant that in a few cases a portfolio was not found that satisfied the constraints.  Those cases were removed.  This is an example of the strength of having missing values in the language.

A sketch for Figure 1 is created with:

2 Responses to Sensitivity of risk parity to variance differences