Figure 1 shows a distribution of realized alpha.  We are used to thinking of the effect of alpha as a number.  However, many assumptions need to be made in order to get to one number.  Those assumptions can have a big effect as witnessed by the width of the distribution in Figure 1 (but see the “fine print” section below). 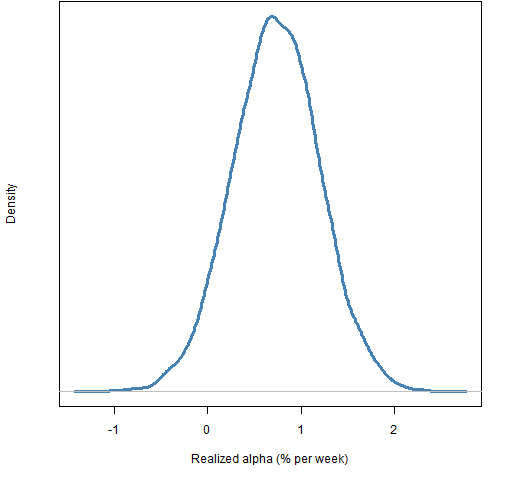 What are we doing?  We are looking at the return of a portfolio that we might hold when using our expected returns and subtracting the return from another portfolio we might hold except we ignore the expected returns when we form it.  Then we do that 9999 times again.  You may be concerned that the control portfolio is very arbitrary — we could end up with a very good one or a very bad one.  Absolutely true, but that doesn’t affect the distribution (I looked).  In particular the tails are very stable — the center peak wiggles around slightly.

The data are of almost all of the constituents of the S&P 500.  The expected return is the default result from the MACD function of the TTR package in R.

The constraints used in the long-only portfolios are:

Figure 1 shows us just one time period.  We can enhance that by adding later time frames.  Figure 2 shows the realized alpha distributions for weeks 2 through 4, and weeks 5 through 13 as well as that for week 1.  At this point in time at least, the decay is quite slow. 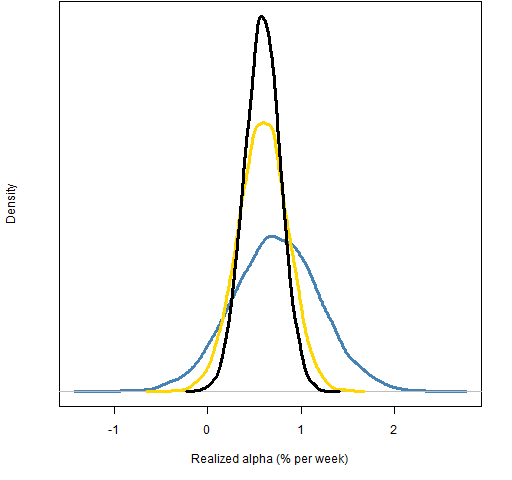 This game can, of course, be played with long-short portfolios as well.  The constraints we use in this case are:

The constraint on the net value was selected to try to counteract the idea that all long-short portfolios are dollar neutral.  Weights — as used here — sum in absolute value to 1. 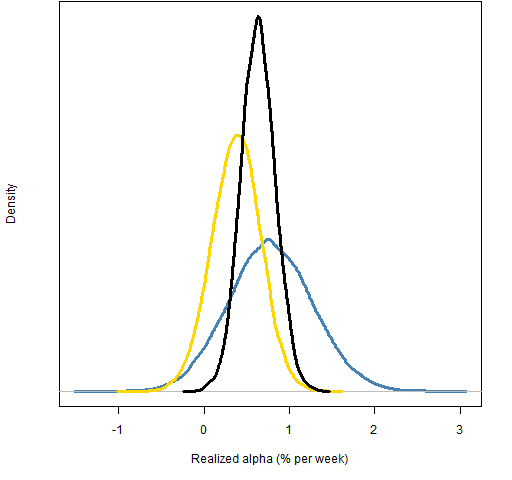 Comparing Figures 2 and 3 we can hypothesize that shorting is not helping us.  We can investigate by generating short-only portfolios that are similar to the short portion of our long-short portfolios.  The constraints are: 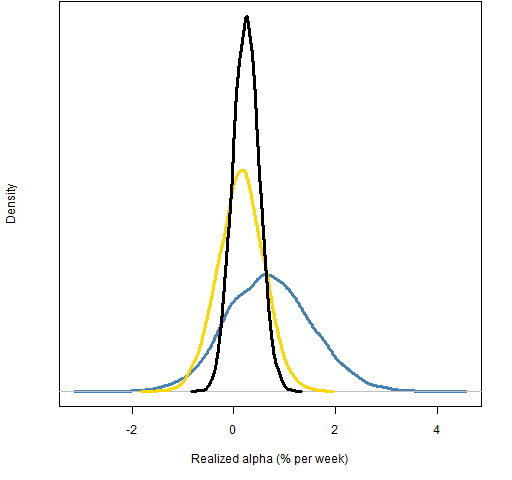 While the shorts have about the same mean return as the longs for week 1, the alpha mostly decays for the later periods.

We should not think that we know something about any market process by looking at just one point in time.  I was expecting the effect of MACD to dissipate quite quickly — I’m surprised that it seems to be basically constant over a quarter.  It would take examination over several time points to understand the typical decay.

Also, of course, you want to select time frames that are appropriate for the strategy that you have.  It looks as though we probably want to look at periods much longer than a quarter for MACD, for instance.

So far I’ve glossed over the bound on the alpha constraint.

Figures 1 and 2 constrain alpha to be at least 4.5 when the maximum possible alpha given the other constraints is about 5.07.  Figures 5, 6 and 7 compare the return distributions (no subtraction of controls) of using the 4.5 bound versus increasing that to 5. 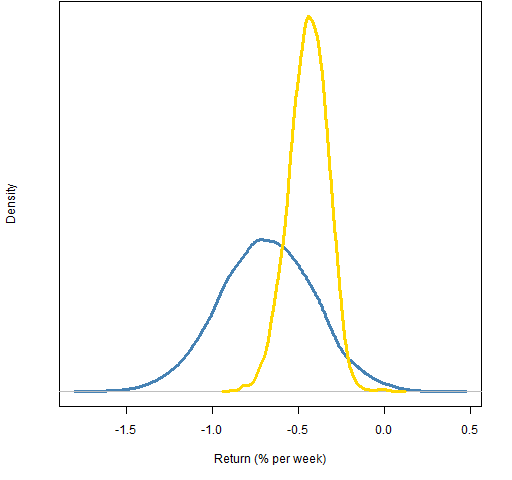 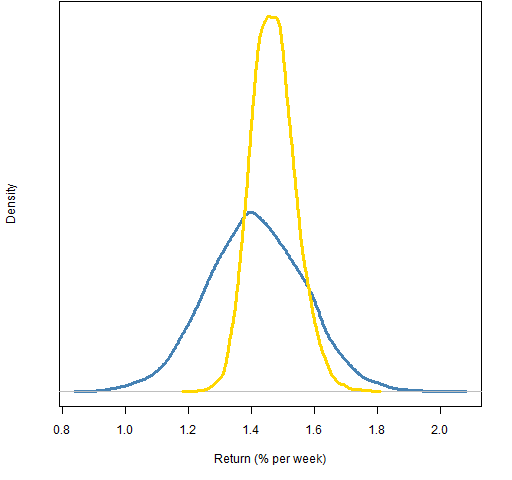 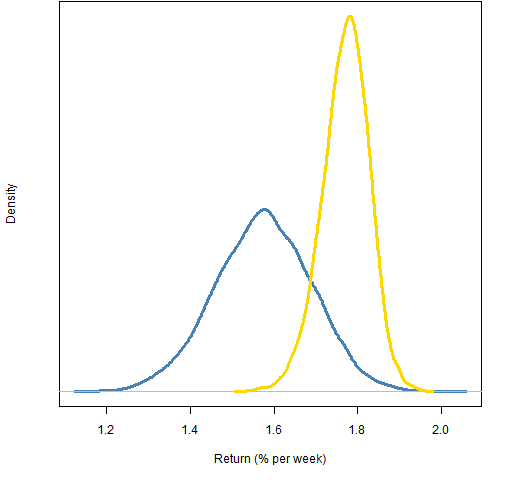 From these figures we can see that the bound has a definite effect.

You might initially think that the tighter the bound the better.  There’s a practical issue that you might wait a long time if you try a very tight constraint.  But a tight constraint might not be appropriate in the first place.  When you actually have a portfolio, you have turnover constraints of some form.  That means that you are probably constrained from getting close to the absolutely best alpha.

There are just three simple steps to do this sort of analysis:

The long-only analysis is quite trivial, but there are a couple of tricky bits in long-short land so we’ll focus attention there.

The other set of random portfolios are computed the same way except the alpha constraint is removed.

The command above is one of the tricky bits.  How do you compute returns for a long-short portfolio?

In the long-only case we start with one million dollars in our hand.  We then use all of it to buy shares; now we have zero cash but the net value of our portfolio is one million.

The return is computed from the net asset value at the start and end times.

There’s another tricky bit with the short-only portfolios.  In terms of returns going short reverses time, so here we reverse time in the prices matrix:

This merely involves using the density function, and then using xlim and ylim arguments to plot in order to be able to see everything.

5 Responses to Alpha decay in portfolios